“For the message of the cross is foolishness to those who are perishing, but to us who are being saved it is the power of God.” –1 Corinthians 1.18

Hannibal Shephard (1810-1849) and his wife Elizabeth Foxwell Shephard (1811-1884) who arrived from Cornwall, England in May 1841, established Methodism in Yorkville. During their first year in Yorkville, Elizabeth Shephard wrote in her diary: “I sensibly feel and my husband also feels that we are as few sheep without a shepherd, having had no class meeting or prayer meeting, but we hope for better days.”

In 1842, among the settlers who arrived from England were some local preachers and class leaders who had been members of the Wesleyan Methodist Association. In gratitude for their coming, the people joined in Christian fellowship at a Thanksgiving meeting in the Hannibal Shephard home. Thus in 1842 the Yorkville Church had its start in a humble pioneer home. During this meeting the Shephard’s third child, Thomas Foxwell Shephard, was baptized.

More settlers arrived and after about two years of meeting in various homes, the need was felt for a special place of worship. On March 11, 1844, resolutions were passed to build a meeting house 22 feet x 28 feet, with a ceiling 10 feet high. It came to be called the Mud Chapel because of its construction. The adjoining burial ground was the beginning of the present Yorkville Cemetery.

The Yorkville Circuit of the Wesleyan Methodist Association in 1845 included Yorkville, Brighton, Paris, Beaumont (Raymond), Caledonia, and English Settlement. There were a total of 71 members with the largest number of members, 22, being at Yorkville. During 1845 the circuit received its first full-time paid minister, Rev. William Drummond, who was sent from England. The preacher and his family were lodged in members’ homes until 1849 when a “Preacher house” was built just east of the Mud Chapel. This parsonage was replaced in 1886. It was used as the parsonage until 1953 and still stands just east of the cemetery.

Sabbath Schools were organized on June 13, 1856 with separate classes for boys and girls. The Sabbath, or Sunday, School is still a vital part of the Yorkville Church. 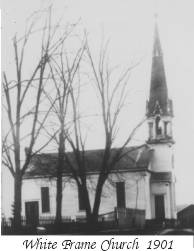 Alliance with the Wesleyan Methodist Association of England ended in December 1860 when the entire Yorkville Circuit formed a new alliance with the Bible Christians within this country. This action took place “for the purpose of promoting the Gospel.”

During this time period Thomas Shephard, the first person baptized at Yorkville, began a Singing School. The singing greatly enhanced religious services and other gatherings. The Yorkville Church still has a wonderful reputation for its choir which to this day includes descendants of Thomas Shephard.

After twenty-four years (1860-1884) of alliance with the Bible Christians, the Yorkville Circuit voted to return to Methodism by joining the Wisconsin Conference of the Methodist Episcopal Church. Membership had grown to seventy-seven by this time.

In 1913 the little white church was both outgrown and outmoded. The congregation voted to relocate and erect a red brick building on the present site. The dedication was held on October 18, 1914. The chapel includes a beautiful Good Shepherd stained glass window that was given as a memorial by descendants of Hannibal and Elizabeth Shephard, as well as other stained glass windows depicting the Christian symbols.

In the early 1950’s the parsonage next to the cemetery was sold and a new one built east of the church. On August 30, 1953, an open house was held at the new parsonage.

Groundbreaking for a church addition was held on October 19, 1958, and the dedication was November 29, 1959. Sunday school classrooms were created in the old building and a new sanctuary and Fellowship Hall were added.

In 1995 Kids Korner began. Kids Korner provides pre-school and before- and after-school care to children in the surrounding community.

Once again the Yorkville congregation began to outgrow its available space. A Building Committee was formed in 1999 and the decision was being made to pursue a building addition. The new addition was completed and dedicated in 2004.

Today the Yorkville United Methodist Church remains a strong, growing church family striving to share God’s love with our community. We hope you will visit us soon and discover for yourself what we are all about.

Yorkville United Methodist Church has firm roots in the Yorkville area, and we look forward to serving you!

Send all of your prayer requests here. They will be delivered to Pastor Sue directly via e-mail.